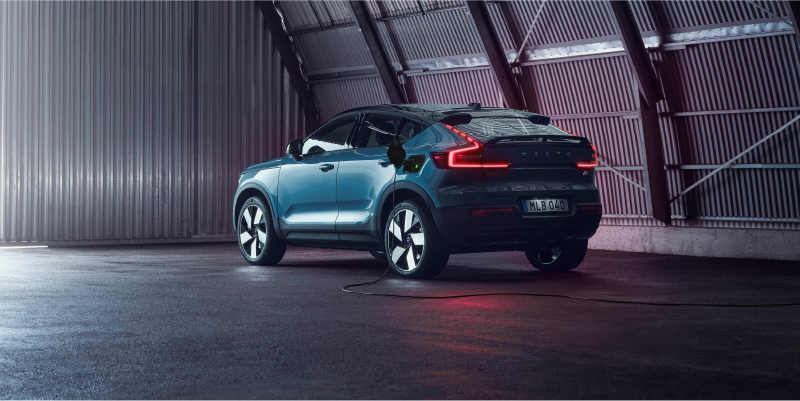 The Volvo C40 Recharge design story: combining the serenity of Scandinavian nature with the confidence of electric ambition

In many ways, the Volvo C40 Recharge represents the future of Volvo Cars: it is the first Volvo model in history designed as pure electric only, and will be offered online with a convenient Care offer. Its SUV elements and benefits combined with a lower profile means that Volvo Cars also enters a new segment – and it does so with cutting-edge design and features not previously seen on Volvo cars.

“The C40 is a car that symbolises electrification and delivers on it,” says Robin Page, head of design at Volvo Cars. “It has the personality of the XC40, which proved to be attractive to many, but it’s dialled up even more through its dynamic expression and sleek profile. It’s a really attractive product for people who are looking for the easy-to-live-with aspects of an SUV with more of a modern statement.”

Built upon the fundamental building blocks of the XC40, the C40 gives the same sense of power and strong character as its sibling while adding athleticism and lightness. This idea of breaking new ground with something familiar is mirrored in individual details: the signature Thor’s Hammer headlights are augmented with new pixel LEDs, which automatically adjust to light conditions and switch on and off independently to optimise the light pattern. The equally emblematic vertical rear lights are now segmented, providing a testament to the engineering challenge of extending one big lamp along the roof line, while also creating a modern take on a classic design.

Carrying on the DNA
Similarly to the birth of the XC40, the C40 started as a spontaneous sketch by one of the designers in the team. And Yury Zamkavenka’s sketch “hit the ground running from the initial idea”, according to T. Jon Mayer, head of exterior design.

“That doesn’t happen very frequently. When it does, it’s always some of the more characterful ideas that flourish, because it’s such a pure statement from that first sketch,” T. Jon continues, adding that the uniqueness of the car – its commanding seating position combined with a streamlined form – becomes very clear when it’s on the road next to other cars.

“One of my favourite views of the car is the rear seven-eighths, which gives you a view of the side and the coupé line profile,” T. Jon says. “You see the SUV elements as it sits on these really big wheels, and it’s this tough little character but with a very sleek approach to the roof. It’s built upon the solidity of the XC40, but in a more dynamic way. These combinations give it a totally different expression, while still carrying on our DNA.”

That DNA is distinguished by a Scandinavian approach in the form language: sections are shaved and carved out of the solid form, creating a sense of purity and refinement; an understated confidence.

“It communicates a solidity, which can also link to a feeling of safety,” T. Jon says. “Subconsciously, this is a powerful beast that’s protective, yet we sculpt it in a way to make it as lightweight and efficient as possible.”

Nature and light
Using these design principles – as well as inspiration from the Scandinavian landscapes with their quiet atmospheres, light and freedom of space – the confidence of the exterior design is tied together with an interior design characterised by the calming effects of nature. There’s the large, panoramic glass roof that enhances the airiness of the cabin, making the most out of short winter days, while blurring the line between outside and inside during bright summer nights.

“In Sweden, it’s dark and grey most of the year – but when the sun shines, the colours come to life much more vibrantly than anywhere else,” says Lisa Reeves, head of interior design. “The grass looks greener, the sea looks bluer. You see this reflected in the architecture here: houses have a lot of glass, designed to really let in the light and the open floor plans spread the light within the house. Light and nature are strong parts of the culture and are important themes for the C40 interior.”

The Fjord Blue colour, inspired by the deep inlets on the Scandinavian west coast, flows from the exterior and creates a continuation inside by colouring the large swathes of carpet that extends up from the floor to the sides of the tunnel console and the front doors. This provides a foundation for the backlit translucent graphics on the dashboard and front door panels, which are a nod to the dramatic, yet serene mountain sceneries in Sweden’s Abisko national park.

“We traced the topography of the park and used the contours to create an abstract digitalised design with a layered pattern,” says Rekha Meena, senior design manager, colour and material. “When the light from LED lamps comes through across the surface it creates this really nice, atmospheric three-dimensional effect.”

Hand-in-hand with nature as a source of inspiration is the high amount of sustainable materials used for the interior. The topography trim panels are partly made of recycled plastic, while the carpet is made of 100 per cent recycled PET plastic bottles. The C40 offers Volvo Cars’ first leather-free interior, with one upholstery option containing naturally renewable wool fibres, and a second option using a combination of suede textile (also made of recycled plastic) and micro-tech material.

“The colour and material team has strived to use smart, innovative and lightweight materials that are sustainable, matching both the design and driveline of the C40,” says Rekha. “With all these new technologies that are developing around us, the colour and material designers have more freedom to play around. Bio-based materials are more attractive and innovative than leather, and they make the car more sustainable.”

The layout of the interior gives a sense of organisation and thoughtfulness, where functionality is key. The C40 repeats the XC40’s ‘uncluttering’ approach, providing smart and thoughtful ways to store all important belongings within arm’s length. Minimalism is an overarching theme, which becomes even more evident when looking at the instrument panel.

A symbol of the next generation
Using renewable and recycled material is one part of the sustainability equation, and the car being fully electric is another. But to really get the message of electrification across, the C40 needs to look the part as well, and it does so with features that blend symbolism and function together.

The new wheel design, influenced by the Volvo 360c concept car from 2018, helps with aerodynamics while creating a dynamic look fitting the driveline; the rear spoiler both characterises and supports downforce on the car; and the roofline boosts aerodynamic efficiency, giving it a functional as well as a visual relationship to range. And then there are the elements where messaging slightly takes the upper hand, like the closed grill and the contrast roof.

“To symbolise the electric car, the face is really important,” says Robin Page. “Part of our design language is about honesty, and the reality is that we don't need a large air intake for an electric car. This car originates from the XC40, which did have a grill, so it's not a case where we can just ignore that and do a super low, fully moulded front. And we wouldn’t want to do that on this car anyway, because the C40 has a characterful face. We achieved a good solution, with strong, pure graphical lines. Together with the contrast roof, which we’ll use to distinguish our 40 cluster electric cars, it’s one of the ingredients that communicates our journey towards full electrification.”

Descriptions and facts in this press material relate to Volvo Cars' international car range. Described features might be optional. Vehicle specifications may vary from one country to another and may be altered without prior notification.